The Sacrifice(s) of Jesus - JBL 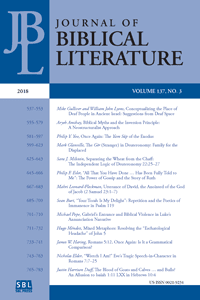 "In the Days of His Flesh, He Offered Up Prayers”: Redescribing the Sacrifice(s) of Jesus in the Letter to the Hebrews" - just published in the Journal of Biblical Literature - explores the Letter to the Hebrews, widely regarded as the most "sacrificial" text in the New Testament. Hebrews not only visualizes Jesus' heavenly "self-offering" as a sacrifice, it also re-conceptualizes Jesus' death as "sacrificial" by extending sacrificial language to the "prayers" that he "offered up" to God, expanding the semantic range of "sacrificial" language in the Jesus tradition. Although Hebrews is usually read as a "Christian" text advocating the superiority of Jesus' "sacrificial" offering to that provided in the Temple, I propose that Hebrews reflects an alternative Jewish sacrificial system in competition with the Jerusalem Temple, that is, a Jewish text that envisions the "sacrifice(s)" of Jesus as an alternative sacrificial system within Judaism, not a "Christian" system that "replaces" Judaism.
Posted by Simon J. Joseph at 7:57 PM
Email ThisBlogThis!Share to TwitterShare to FacebookShare to Pinterest
Newer Post Older Post Home