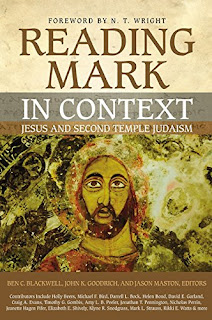 My review of Reading Mark in Context has just been published in the Review of Biblical Literature. An excerpt from my review of this volume:

"The Gospel of Mark simply cannot be read or understood without understanding Second Temple Jewish literature. Yet one gets the sense that while Mark situates Jesus within Judaism, it is a situation filled with tension, as the author seeks to forge a new sense of group identity through the central symbol of “Jesus’” conflicts with(in) Judaism, portraying Jesus in such a way as to construct a kind of “proto-Christian” difference from Judaism which would subsequently be mapped as Christianity’s “difference” from Judaism, and re-inscribed in generation after generation of Christian dissociation from Judaism.

Re-locating the Gospel of Mark in its wider Jewish context, the essays in Reading Mark in Context introduce readers to the study of Mark within the literary, historical, and theological contexts that it both drew from and distinguished itself from. And while many of the essays re-inscribe Mark’s promise/fulfillment paradigm (in which Jesus “fulfills” Jewish messianic prophecies), that is to be expected given the authorial Tendenz of the Markan narrative . The goal of this volume was not to distinguish between the Markan Jesus, an historical Jesus, and the Jesus of history, but to illuminate the literary world of the Markan narrative. The editors and authors are to be commended for this collection of well-written and accessible essays, each of which illuminates the Markan context without unnecessarily complicating its discussion with questions of literary dependence. Readers will appreciate the Introduction outlining the volume’s methodological approach and structure, along with its brief overview of Second Temple literature, and a helpful glossary of key terms. I would strongly recommend these essays for “beginning and intermediate students” of the Gospels, not simply because they successfully contextualize the Markan texts in their wider literary contexts, but more so because they drive home the important message that a contextual reading of Mark requires attending to the creative complexity of its relationship with(in) Second Temple Judaism."
Posted by Simon J. Joseph at 8:54 PM
Email ThisBlogThis!Share to TwitterShare to FacebookShare to Pinterest
Newer Post Older Post Home