Jesus and the Chaos of History - A Review 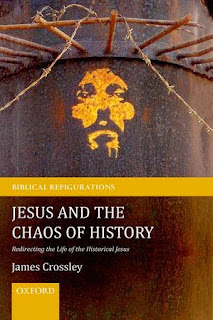 James and I share a number of scholarly research interests, including the historical Jesus, Second Temple Judaism, and Christian origins. We also share a mutual interest in identifying how the study of Judaism (and Jesus' "Jewishness") functions in scholarship. My review focuses on four areas of common interest: the general reliability of the "Early Palestinian Tradition" (as opposed to privileging any particular solution to the Synoptic Problem), the identification of Jesus as a "Great Man," the ideological site of Jesus' Jewishness and the Law,  and the relationship between Jesus and violence.

James and I have different perspectives, of course, on Jesus’ relationship to the Torah, the Temple, and (non)violence. James proposes that “there is no obvious unambiguous opposition to the notion of animal sacrifice per se in the Synoptic tradition” whereas I propose that the Gospels presuppose the central theological claim that Jesus is the sacrifice which replaces the Temple’s sacrificial system and portray Jesus as symbolically abolishing the Temple cult in various ways (by "cleansing" the Temple, cursing the fig tree, expelling the animals, etc.). James concludes that it is “certainly possible that a more violent Jesus was ‘covered-up’ by later Gospel writers to ensure Christianity was not seen as a societal threat.” I conclude that a less violent Jesus was "covered up" by later Gospel writers who preserved these earlier nonviolent traditions nested inside an increasingly violent narrative directed at unbelievers. This violent narrative of “eschatological retribution” represented a particularly effective way to articulate and envision the promise of a better future. James agrees that Jesus could possibly have had a nonviolent orientation, but it was a temporary strategy anticipating a future kingdom while “acknowledging other possible reasons behind a nonviolent message.” I see Jesus’ nonviolent ethic less as a temporary political strategy, and more as grounded in his theological convictions.

Despite these differences, we still share the common goal of identifying Jesus as a first-century Jew facing colonial oppression, socio-economic disintegration, and sectarian conflict. We share the common conclusion that he worked within an apocalyptic worldview, and the goal to construct some kind of order out of the "chaos of history."