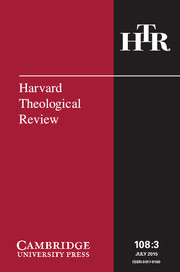 Happy to say that my new article, “The Quest for the ‘Community’ of Q: Mapping Q Within the Social, Scribal, and Textual Landscape(s) of Second Temple Judaism,” has just been published in HTR! This article developed out of a paper I gave in the Q Section at SBL a few years ago which questioned the concept of a Q "community." The article provides a history of research on the Q-community concept, but it also advances a new theory of how Q can be located or "mapped" within Early Judaism: in relationship to the Essenes. The idea of Essene influence on early Christianity has not, of course, always been welcome in the study of Christian origins. The Essenes complicate Christian origins as they do not represent mainstream or “common Judaism,” but rather sectarian streams, implying a kind of improper mixing. I think a similar “anxiety of influence” was registered when analogical (and genealogical) parallels drawn between Q and Cynic philosophy seemed to undermine its exclusively Jewish/Christian origin. I think similar dynamics can also be posited in terms of “Gnostic” influence on early Christianity. In each case, the suggestion that heterodox Jewish, “Gnostic,” or pagan/Cynic ideas influenced early Christianity conjures up a common fear and a recurring pattern: the spectre of an ancient Orthodoxy/Heresy discourse that defined Christianity in opposition to the Other.

I'll have much more to say about the Essenes and early Christianity in my soon to be released new book, Jesus, the Essenes, and Christian Origins, coming in April 2018.