"The Gospel of the Ebionites" in NTS 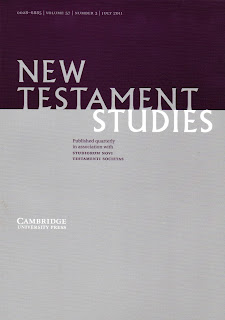 Honored to have been invited by Francis Watson, the editor of New Testament Studies, to contribute an article to the journal about my new book, Jesus and the Temple: The Crucifixion in its Jewish Context (SNTSMS; Cambridge University Press, 2016). My article, ‘“I Have Come to Abolish Sacrifices” (Epiphanius, Pan. 30.16.5): Re-examining a Jewish Christian Text and Tradition,’ explores how a particular passage from the Gospel of the Ebionites (a ‘text’ that exists only in fragments extrapolated from the writings of Epiphanius) raises a number of questions about the use of non-canonical gospel traditions in New Testament studies. Since the Gospel of the Ebionites is generally regarded as a "Jewish Christian" text - and ancient "Jewish Christianity" continues to be hard for us to grasp both historically and conceptually - the text raises some interesting historical and theological questions about Jesus’ relationship to the Temple cult, questions still at the very center of contemporary discourse on the historical Jesus as well as the relationship between Early Judaism, "Jewish Christianity," and (Early Gentile) Christianity.