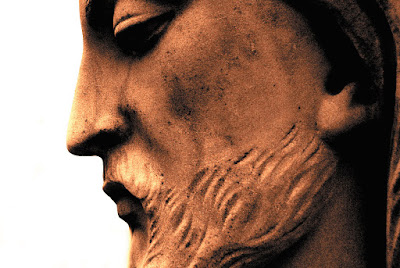 The historical Jesus was a theologically-interested and invested human being. The Jesus tradition was created by theologically-interested and invested authors. Consequently, using theological language and vocabulary in order to understand the origin and development of this historical figure and tradition is virtually unavoidable. It is the interplay of social, economic, political, and theological forces that converge to create and sustain religious movements. The sociological structures of the Jesus movement, the economic pressures on rural Galilee, the political landscape(s) of the Herodian era, and the ideological and theological streams of thought and practice all shaped the lives of first-century Jews. History, in other words, is not simply a record or description of past events, but analytical explanations of the causal forces that generate events. So if our texts represent more than just the ideological thought-world(s) of the texts themselves, and we really want to understand them, then we need to understand and explain the historically enacted theologies of these particular ancient people.

The Jesus tradition contains multiple historical theologies about Jesus. The question, therefore, is whether any particular text about Jesus accurately represents Jesus’ own views and/or provides evidence of history, memory, tradition, and/or redaction. We may or may not agree with the kinds of things Jesus said, the kinds of things ancient authors “believed” about him, or even the best ways to go about assessing the reliability of these traditions, but we might be able to agree that early Christians had “beliefs” that influenced their actions and that those “beliefs” changed over time.

Unfortunately, our disciplinary distinction between history and theology leads us to think that history and theology are methodologically incompatible, with scientific "history" representing the disinterested, neutral pursuit of knowledge and "theology" representing confessional conviction. This is due, in part, to how these disciplines, within their respective institutional locations, are defined. But this differentiation often blurs the boundaries between ancient and contemporary theological data.

Historians today routinely note the constructed nature of historical knowledge. We have no direct access to the past. We read ancient texts in the light of the present. These historiographical truisms illustrate that the old “scientific” ideal of the “dis-interested” pursuit of knowledge – an ideal that could once be polemically contrasted with theologically “interested” readings – has given way to more self-reflexive historiography. We are all “interested,” whether we admit it, recognize it, or not. Scientific history is now increasingly understood as representing disciplined readings interpreted by interested agents who construct the past within their own complexly situated social locations.

We study the past, but we live in the present. The historian lives with(in) the tension produced by their social location in relationship to the object of their study. This leaves the critical scholar in something of a quandary. The critical historian may or may not be personally and ethically concerned about biblical endorsements of slavery, genocide, and the subjugation of women, but since such ideas and practices come from another time and place, they can be understood as belonging to the past. On the other hand, biblical literature continues to inform contemporary readers. Our idealistic desires to maintain methodological purity boundaries are often thwarted by the messy realities on the ground.

While contemporary theological interests are always part of the wider contemporary landscape of interpretation, they can nonetheless be "subordinated," if not bracketed altogether, in historical judgments. As Jonathan Z. Smith puts it in Teaching Religion,

“I find no problem, in principle, between the 'academic study of religion'
and the 'theological approach' . . . But this is because I invoke a principle

of subordination. After all, individuals who 'affirm' . . . some 'religious tradition'
make up the bulk of the data for the study of religion . . .
From the perspective of the academic study of religion, theology is a datum,
theology is one appropriate object of study for religious studies." (74)

Contemporary theological beliefs represent data for the contemporary scholar of religion. Ancient theological beliefs represent data for the ancient historian. Historically speaking, therefore, it is imperative to isolate, identify, compare, contrast, and explain the different representations of “Jesus” and “God” in the biblical tradition. It is the Jesus-historian's job to construct persuasive and explanatorily powerful hypotheses that account for the material and documentary evidence and provide sequential narratives of "what happened" and why. In other words, it is the historian's job to account for the literary and theological developments embedded within the early Jesus tradition.


The historical Jesus’ theology is an historical problem that should be discussed with historical arguments and hypotheses evaluated on their historical merits, not judged based on whether or not they conform to or challenge contemporary theological beliefs.

We may not be able to get inside Jesus' head but that doesn't mean we can't interpret his worldview based on his sayings and acts. We don't need to explain the ancient past with the theories and theologies of ancient peoples. But we do need to explain those theologies in their ancient contexts. That is simply the historical Jesus scholar's cross to bear.
Posted by Simon J. Joseph at 9:12 AM
Email ThisBlogThis!Share to TwitterShare to FacebookShare to Pinterest
Newer Posts Older Posts Home
Subscribe to: Posts (Atom)