Jesus and the Temple Tax

The Temple incident portrays Jesus as deeply upset with the Temple's administration, but it is not clear - as I discuss in my book, Jesus and the Temple - why Jesus was upset or why Jesus offended. Biblical scholars have developed a remarkable number of possible explanations for this and many surmise that Jesus was offended by corruption in the Temple. It is not difficult to envision a pious and passionate Jesus offended by over-commercialization in the house of God.

It seems fitting, therefore, to consider whether economic motives and implications lay behind Jesus’ action in the Temple and a high priestly plot against him. Some scholars have suggested that Jesus objected to the annual half-shekel Temple tax (Exod 30:13) required of all Jews. The Qumran community, in particular, opposed the annual collection of the tax, holding that the tax should only be paid once, when a man reached the age of 20 (4Q159). Did Jesus also object to the annual collection of the tax?

Alternatively, it has been suggested that Jesus objected to the pagan iconography of the Tyrian shekel, but there is no evidence to support this theory. Some scholars have suggested that Jesus thought that he was above paying the tax because some priests were exempt (m. Sheqalim 1.4), but Jesus never claims to be a priest exempt from the tax. Other suggestions include Jesus rejecting the idea that the poor should have to pay the tax, Jesus thinking that sacrifices should be paid for by everyone through the tax, and Jesus rejecting the tax as being equivalent to his rejection of the Temple.

Many scholars focus on the money-changers and the surcharge added for the service of exchanging local coins for the Tyrian shekel, but the money-changers were a practical necessity. They exchanged foreign monies into the silver coinage of Tyre. So there does not seem to be anything particularly scandalous about a “surcharge” being added as part of an officially sanctioned economic transaction so that people could purchase sacrificial items. We never hear anything in the Gospels about Jesus objecting to the surcharge.

So what's the deal? There is only one passage in the New Testament that explicitly mentions the Temple tax (Matt 17:24-27), and here Jesus is depicted as dutifully paying it. What does this mean? The fact that the Temple tax is only mentioned in Matthew is curious, especially if we recall that Matthew is widely seen as the most "Jewish" of the Gospels. Here Jesus is portrayed as a faithful Jew who observes the Torah and endorses the Temple. Matthew's Gospel, after all, portrays Jesus as having a positive view of the Temple as illustrated in sayings about leaving a gift at the altar (4:23-24) and swearing by the Temple (23:16-22). Should we take Matthew at face value?

The Gospel of Matthew may affirm Jesus' Jewishness, but it also portrays him as rejected by his contemporaries. This Gospel contains some of the most polemical and hostile rhetorical attacks on Jews in the New Testament (Matt 27:25). According to Matthew, Jesus suggests that he should be exempt from payment, but pays the tax so as not to cause offense. But even the way that Jesus produces the tax - by "miraculously" instructing Peter to retrieve it from a fish's mouth - seems suspect. Many scholars regard this as a late saying and inauthentic. The Jesus Seminar, for example, dismisses this passage (Matt 17:24-27) as redactional. Moreover, it is Matthew 26:14-15 - and only Matthew - that identifies how Judas betrayed Jesus for 30 pieces of silver. This is the only Gospel that contains this prophetic reference (Zech 11:12-13; cf. Exod 21:32), signifying that Judas' blood-payment probably consisted of Tyrian shekels taken from the Temple's treasury - further implicating the high priests in Jesus' death.

The relationship between Jesus and the Temple is complicated. There does not seem to be any reason to think that Jesus objected to paying the Temple tax, despite how Matthew implies that Jesus shouldn't have had to. Matthew, like Mark, carefully safeguards Jesus against this charge of politico-economic sedition, but as I discuss in Jesus and the Temple, there may be other reasons for Jesus' disagreements with the Temple's administration.
Posted by Simon J. Joseph at 6:41 PM
Email ThisBlogThis!Share to TwitterShare to FacebookShare to Pinterest

On the Dead Sea Scrolls Exhibition 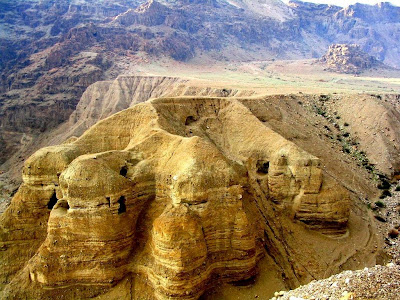 Dead Sea Scrolls: The Exhibition at the California Science Center in downtown Los Angeles is the largest Dead Sea Scrolls exhibit ever shown outside the land of Israel. It is an excellent and impressive collection of artifacts illustrating the history and archaeology of Israel. It is a rare privilege and pleasure to see these ancient texts in person and reflect on their ancient contents, contexts, and communities.


In addition to the Scrolls - which include fragments from the Book of Giants (4Q530), the Psalms (4Q83), Isaiah (4Q56), and the Songs of the Sabbath Sacrifice (4Q400) - there is also a fine collection of stone vessels, cylindrical clay storage jars, and the tefillin, leather sandals, and linen Scroll-wrapping collected from the Qumran site. I was struck by the beauty, purity, simplicity, and clean lines of these Qumran artifacts and I was also pleasantly surprised to see several of the Talpiot tomb ossuaries, including the famous Mariamne ossuary, as well as a three-ton stone from the Western Wall.

The curators are generally even-handed and well-informed. There is even a kind of Abrahamic rapprochement to the exhibit in so far as Judaism and Christianity (and Islam) are portrayed as branches off the older root and vine of ancient Israel without inscribing any kind of covert supersessionistic theology. Yet there is also a noticeable reluctance to identify the Qumran community as "Essenic," suggesting rather that the Essene identification - initially adopted with enthusiasm by scholars - is now uncertain. It is telling that a recent review of the Exhibition in USC's Daily Trojan reports that while "Some argue that the scrolls are connected to the town of Qumran," "Some scientists doubt that the Essenes wrote the scrolls."

I understand that the Exhibition is curated for the general public, but I find this ambivalence disappointing. Although there is an ongoing debate about the identity of the Qumran community and the authors and collectors of the Scrolls, the Exhibition makes it seem like rival hypotheses (that Qumran was a manor house, villa, pottery factory, or fortress) have equal weight. This is misleading and inaccurate, given that there is actually quite a lot of correspondence between the sectarian scrolls and the sectarian settlement at Qumran. I don't think anyone has ever said it better than the late Frank Moore Cross:


The scholar who would ‘exercise caution’ in identifying the sect of Qumran with the Essenes
places himself in an astonishing position: he must suggest seriously that two major parties
formed communistic religious communities  in the same district of the desert of the Dead Sea
and lived together in effect for two centuries, holding similar bizarre views,
performing similar or rather identical lustrations, ritual meals, and ceremonies.
He must suppose that one, carefully described by classical authors, disappeared
without leaving building remains or even potsherds behind: the other,
systematically ignored by classical authors, left extensive ruins, and indeed a great library.
I prefer to be reckless and flatly identify the men of Qumran
with their perennial houseguests, the Essenes.

While the Essene theory does not compel assent from every specialist, it has hardly been displaced or disproved. For many specialists, the real challenge is not replacing the Essene hypothesis with another theory, but clarifying the relationship(s) between the (sectarian/Essene) inhabitants of the Qumran site, the pre-sectarian Enochic tradition, and the Essenes as described in Josephus, Philo, and Pliny. It is this complex nexus of inter-relationships that the Exhibition fails even to mention, let alone engage.

The Exhibition thus fails to fully represent the Scrolls, the community, the Qumran site, and contemporary scholarship. It gives the distinct impression that what is most significant about the Dead Sea Scrolls is that they represent our earliest manuscript witnesses of many biblical texts. While this may be true, the Exhibition fails to highlight the fact that a significant portion of these texts are original compositions reflecting the beliefs, interests, and convictions of a sectarian community. Despite these reservations, this is an Exhibition not to be missed.
Posted by Simon J. Joseph at 5:08 PM
Email ThisBlogThis!Share to TwitterShare to FacebookShare to Pinterest 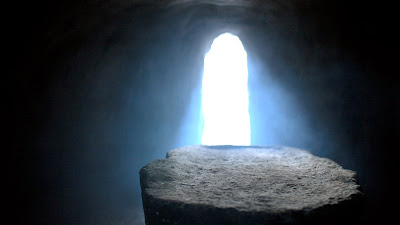 The resurrection of Jesus is the central claim of the Christian faith. It is what makes Christianity a distinctive, perhaps even "unique" religion - the claim that “God raised Jesus from the dead.” That is also what makes the claim so vulnerable to critics. Why? Because it presupposes the existence and agency of God. Historical hypotheses, however, presuppose human agency and natural causation, not supernatural interventions by God. It is not surprising that contemporary discourse on the resurrection of Jesus is at an impasse. This article explores the current state of research on this subject – a field polarized between apologetic defense and rationalistic expose – and examines various attempts to redefine, reimagine, and redescribe the resurrection tradition within early Christianity.
"Redescribing the Resurrection: Beyond the Methodological Impasse?,"
Posted by Simon J. Joseph at 9:56 AM
Email ThisBlogThis!Share to TwitterShare to FacebookShare to Pinterest
Newer Posts Older Posts Home
Subscribe to: Posts (Atom)