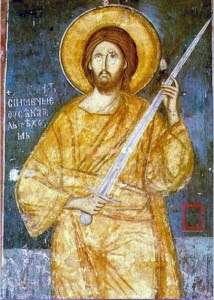 How often does Newsweek discuss scholarly articles in obscure academic journals? Not very often. But when research suggests that Jesus and his disciples were violence-prone apocalyptic revolutionaries, they make an exception. In “Jesus Was Crucified Because Disciples Were Armed, Bible Analysis Suggests,” Newsweek reporter Douglas Main discusses the provocative implications of a recent article, “Jesus in Jerusalem: Armed and Not Dangerous,” by Yale University professor Dale Martin. The Newsweek article announces that this new research suggests that “the man from Nazareth was not the pacifist he’s usually made out to be” and that “Jesus may have been crucified because his followers were carrying weapons.”

The Violent Revolutionary Jesus hypothesis has long been rejected by most New Testament scholars, as I noted in my review of Reza Aslan's Zealot last year. I have argued that Jesus advocated and practiced a radical form of eschatological nonviolence. Martin's thesis would seem to call that conclusion into question. But as New Testament scholar Paula Fredriksen points out, Martin's thesis has holes so big “you could drive trucks through” them. For example, just because carrying arms was illegal in Rome doesn’t make it so in Jerusalem, a claim that Martin asks us to simply take "it for granted." Fredriksen also adds that the Greek word for sword “really means something more akin to knife,” and such weapons were easily concealed. Nonetheless, she sees her disagreements with Martin as part of the "contact sport" that is Jesus scholarship: the controversy itself is all part of the "fun."

If Jesus and his followers was preparing to participate in a military overthrow of Roman rule in Judea, he certainly had a funny way of showing it. And the Romans and Jewish authorities certainly had a funny way of punishing them. It is true, of course, that the Book of Revelation envisions an end-time battle, as does the Qumran War Scroll. And it seems reasonable enough to conclude that some passionate apocalypticists took up arms against the Romans. But it is highly unlikely that Jesus was one of them. Why not?

The problems are legion.

Martin begins his discussion by stating that "At least one of Jesus' disciples was armed" at his arrest. He then leaps to the conclusion that because one disciple might have been armed that all of Jesus' disciples - even Jesus himself - were armed. That is just wishful thinking. While it is certainly possible that some of Jesus' disciples or followers may have been covertly "armed" or that there could have been some type of scuffle, that's as far as the evidence goes. Furthermore, in Matthew, Luke, and John, Jesus rebukes the violent act, which is hardly what one would expect if Jesus thought he was launching an angelic holy war. We should not forget that it is the Markan Peter who must also be rebuked by Jesus for misunderstanding his messianic vocation as a militaristic one.

Unfortunately, the problems do not end here. Even if two or more of Jesus' disciples did possess large swords, this un-interpreted fact alone does not tell us very much. Perhaps they were simply armed against brigands and thieves. A few weapons were not "enough" to take on the Roman army nor can we assume that the reason they carried them was to prepare for an imminent apocalyptic war. The mere "fact" (if that is what it is) that a few disciples were armed tells us nothing about their apocalyptic intentions or readiness for battle. In the Gospel of Luke, the only reason the disciples possess swords is to fulfill the prophecy of Isaiah 53 ("he was counted among the lawless"). Martin plausibly dismisses this as "invention," but his alternative explanation is far more problematic.

If Jesus and his disciples were "armed," why wasn’t Peter (or the unnamed follower) arrested for cutting off a person’s ear? And  why does Luke portray Jesus as healing the servant's ear? If Jesus' disciples were armed and ready for war, why weren’t they all rounded up for sedition? Martin knows that these are major objections to his thesis, but he dismisses these arguments, asserting that the Romans were "pragmatists" (18) and did not need to hunt down the followers once the leader had been properly disposed of. If Jesus and his disciples were really embarking on a military revolt against Rome, I think it's reasonable to conclude that Rome would have eliminated the entire threat.

While the article's title would lead us to believe that the argument will center on the disciples being armed, the heart of Martin's thesis actually focuses on the Temple incident. Here Martin follows E. P. Sanders in arguing that Jesus symbolically demonstrated "the imminent destruction of the temple." Yet Martin goes further in stating that Jesus' act in the Temple was "an attempt to catalyze that destruction" and "may have even threatened to do it himself." He also argues that Jesus intended to launch an angelic "overthrow" of the high priestly rulers and Roman overlords. As most Jesus scholars know, the Temple incident is a complicated site of interpretation. It is very difficult to do justice to the historical and theological problems associated with it. The authors of the Gospels each have their own theological interpretation of the event and want us to think that Jesus predicted, threatened, and inaugurated the destruction of the Temple. Why? Because that signals the end of one era and the beginning of the new, "Christian" era in which Jesus is the ultimate sacrifice, replacing the Temple. Consequently, we cannot assume that Jesus sought its destruction. Martin thinks that Jesus wanted to destroy the Temple, but he doesn't explain why (14).

In the end, the whole point of Jesus' ministry - in the Gospel according to Dale Martin - is that Jesus was a "ringleader" who gathered together a small peasant army to march on Jerusalem during Passover where he would launch a violent overthrow of Roman and high priestly rule as "a small detachment in a much larger [angelic] army" (18). In Martin's eyes, Jesus is tragically deluded - and terribly wrong about just about everything.

This attempted resurrection of the (violent) Revolutionary hypothesis - an hypothesis that Martin admits to having been "discredited" many times before - seeks not only to "second others' claims that Jesus was leading a band of armed insurrectionists," but to "strengthen that hypothesis" (4). Martin begins with a firm foundation - "Jesus was expecting the inbreaking of apocalyptic events" (6) - but within a few short pages misrepresents Jesus' apocalypticism as violent. Martin's thesis implicates Jesus as guilty by association, blaming the disciples for Jesus' crucifixion because they carried swords. Where is that in the historical record? Did Pilate crucify Jesus because his disciples had a few knives? Is Jesus really to be held responsible for everything his wayward disciples do? If that is the case, then Jesus really has a lot to answer for.

The most disturbing thing about Martin's thesis is that it runs roughshod over - in fact, ignores - Jesus' teachings on nonviolence, non-retaliation, and love of enemies. While Martin is correct in saying that Jesus' "apocalyptic expectations must be brought into any scenario" (4n2) - that is precisely where his thesis fails, illustrating how truly "dangerous" the misinterpretation of that "scenario" can be. Martin's paper - while a over-simplification of Early Jewish apocalypticism in terms of eschatological violence - provides an opportunity to revisit the monolithic "apocalypticism" of scholarly imagination.
Posted by Simon J. Joseph at 5:19 PM
Email ThisBlogThis!Share to TwitterShare to FacebookShare to Pinterest
Newer Posts Older Posts Home
Subscribe to: Posts (Atom)