The Crucifixion as Icon 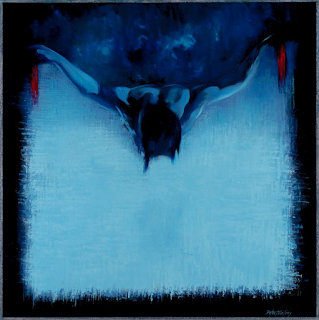 Native American artist Poteet Victory’s recent work, "The Crucifixion" is one of the most modern paintings of an ancient icon. Reminiscent of Salvador Dali’s Christ of Saint John of the Cross as well as Mel Gibson’s cinematic recreation of God’s heavenly eye-view of Jesus’ crucifixion on earth, Poteet’s haunting image of Jesus floating above an ethereal blue skyscape bears witness to what once seemed obvious to Christian faithful: that they could be confident that they shared God’s view of the crucifixion as seen from above . . .

People see different things in the Crucifixion of Jesus based on their different worldview(s). Whether as visual icon or historical datum, the Crucifixion now lends itself to multiple narratives and interpretations. Christian faithful see a blood sacrifice “for our sins,” the ultimate "end of sacrifice" that replaces the Temple cult. Alternatively, the true meaning of the crucifixion could be seen as an esoteric demonstration of Jesus’ non-physical reality, as in gnostic worldviews, both ancient and modern. More recently, different Mythicist proposals picture the Crucifixion of a celestial Jesus in “outer space.” Historians see a conflict of interests, political conspiracy and assassination. The Crucifixion is inextricably linked to Jesus’ relationship to the Temple, one of the most intractable problems in Jesus Research, as I discuss in my book, Jesus and the Temple: The Crucifixion in its Jewish Context. While Jesus probably objected to economic corruption in the administration of the Temple, it is also possible to see Jesus on the cross as the evidentiary basis for portraying Jesus as a "revolutionary" figure.

The Crucifixion is historical Jesus bedrock. That is, in part, why it can be interpreted in so many different ways. It is difficult to deny that it happened. It is more difficult to explain why it happened. It is even more difficult to explain what, if anything, it means. This is where things get interesting. Let us take, for example, the Seditious Jesus theory. It has taken a number of forms, but a good case can be made that Jesus was rebellious and revolutionary based on his crucifixion. The question is whether that means that Jesus really was a political criminal. The question is not whether Jesus ended up being executed for “sedition,” but what brought Jesus to the cross? Here there is no consensus. The Gospels identify Jesus as a divine blood sacrifice opposed by the Jewish religious leaders and executed by Rome. But the fact that Jesus died a violent death does not mean that Jesus lived a violent life. If Jesus said that “those who live by the sword will die by the sword” (Matt 26:52), then Jesus’ followers certainly “remembered” him as true to his word as one who neither lived nor died by the sword. This doesn't mean Jesus liked Roman rule, but it also doesn’t mean that he led his disciples in armed revolt against it.

There are many ways that a first-century Jew might have ended up on a Roman cross. One of them is angering the religious leaders who collaborated with the Romans. There is little doubt that Jesus was charged with sedition (otherwise he would not have been crucified) and perceived as politically subversive (because he was proclaiming the arrival of a coming “king-dom of God”), but Jesus was also perceived as religiously subversive and may have criticized the economic corruption of the priesthood and their collaboration with Rome. The Romans did not just crucify “seditionists.” The Romans also crucified people for defamation of the emperor, “stirring up the people,” and military desertion. Josephus reports Romans crucifying Jews for no apparent reason at all during the Revolt. When it comes to the crucifixion of Jesus, there is more than enough blame to go around to shoulder the burden of the cross: Pontius Pilate, Caiaphas, Judas, the disciples, Satan, God.

By the High Middle Ages, the cross of Christ, symbol of his suffering humanity – like the Stations of the Cross in Jerusalem – reflected new interests in imitating Jesus’ earthly suffering. This focus on blood and open wounds and bleeding crosses in dark cathedrals had an inevitable effect on the tradition where it could also be seen as representing the physical misery of earthly existence when the powers-that-be turn brutal and unforgiving. It is no accident of history that many European Jewish artists and writers of the post-Enlightenment, like Marc Chagall (who returned to the Crucifixion of Jesus over and over again throughout his career) began to see the Crucifixion of Jesus as a symbol of their own (peoples’) suffering: Jesus on the Cross in symbolic solidarity with his Jewish people. Jesus dying daily, still crucified by a Christianity that denied his Jewish identity.

For almost two thousand years, the Crucifixion of Jesus was a predominantly Christian symbol. After the Enlightenment, the Crucifixion became a symbol of Jewish suffering. Today the Crucifixion belongs to all of us - a master-Icon, an archetypal image imprinted on the psyche - symbolizing the crucifixion of our very reality, torn between the false dichotomies and binary oppositions of religion and science, faith and reason, history and theology, human and divine, spirit and flesh. 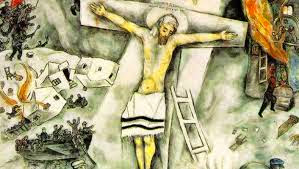 Note: with thanks to Brian Pounds (University of Cambridge) for his work on Roman crucifixion.
Posted by Simon J. Joseph at 12:43 PM
Email ThisBlogThis!Share to TwitterShare to FacebookShare to Pinterest
Newer Post Older Post Home