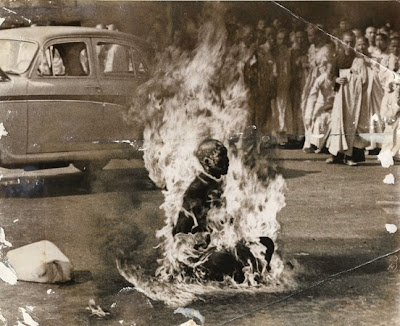 On June 11, 1963, 66-year old Buddhist monk Thich Quang Duc arrived in downtown Saigon, sat down, and had two fellow monks pour gasoline over him. He then ignited the gasoline with a match. David Halberstam, a reporter for the New York Times, witnessed the event and wrote: “as he burned he never moved a muscle, never uttered a sound, his outward composure in sharp contrast to the wailing people around him.”

The fact that Thich Quang Duc could perform this self-immolation in public - and that it was recorded  and photographed - has fascinated me for years. Being burned alive is one of the most painful experiences imaginable. But Thich Quang Duc seems to have remained sitting the entire time, even while his body was engulfed in flames. Did he not feel the pain? Or had he reached a state of dissociation from the body so profound that he could remain immobile - as if he didn't feel the pain at all? What are we supposed to make of this extraordinary event? Was it simply an example of a poor misguided monk's pathological dissociation of mind and body? Or a noble and extreme political protest of the Vietnam war? Do we call it a remarkable demonstration of willpower? Or a documented example of the human ability to not only tolerate extraordinary pain but "transcend" it? If Thich Quang Duc was registering the pain, he certainly wasn't showing it.

The material fact of this Associated Press photograph serves as documentary evidence of an undeniably historical event. And however one chooses to explain the event, this was not trickery. This photograph - like Thich Quang Duc's self-immolation itself - has the capacity to jar us out of our comfort zones into a very different world of perception where our most common (even fundamental) assumptions about our ability to experience pain - without experiencing pain - are subject to question. Ariel Glucklich, in Sacred Pain: Hurting the Body for the Sake of the Soul, explains how religiously-motivated pain can produce "states of consciousness, and cognitive-emotional changes, that affect the identity of the individual subject." We now know that the nervous system can function in such a way as to make it possible "to experience painless injury to the body" and that even "acute" pain is "to a very large extent, a mental event." Thich Quang Duc's self-immolation is a rare example demonstrating - and documenting - just such an experience. While current research has made significant strides in identifying that physiological processes are involved, we have not yet explained how this monk was able to control this process.
Posted by Simon J. Joseph at 11:34 AM
Email ThisBlogThis!Share to TwitterShare to FacebookShare to Pinterest
Newer Post Older Post Home